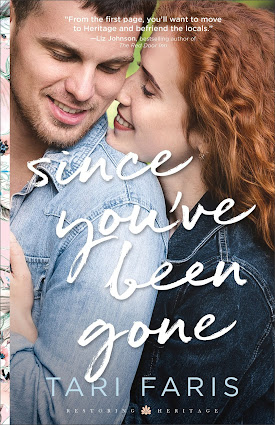 With her vision and his know-how, this thing just might work . . .

Leah Williams is back in the quaint town of Heritage, Michigan, and ready to try again to make her business a success. But blank slates are hard to come by, and a piece of her past is waiting for her there. Heir to the Heritage Fruits company, Jonathan Kensington is the guy who not only made Leah’s past difficult, but he also seems determined to complicate her present as well.

In order to avoid forcing a buyout of Leah’s building, Jon will have to strike a compromise. Can the two of them work together? Or will their troubled past set the tone for their future?

From Since You’ve Been Gone

Leah Williams – Full of color and spunk, hates making hard and fast decisions, and likes to go with her gut. She’s just returned from a trip to Costa Rica and her twin sister is weeks away from making her an auntie. Most of her clothes are retro or vintage and her greatest pastime is sewing new designs. She and her twin, Caroline, may have always looked alike with their red hair and green eyes, but Leah was always the wild one who liked to live on the edge while Caroline played it safe with her lists and plans. Only the edge that Leah has found herself on this this time will either lead to freedom or her demise.

Jon Kensington –His disarming smile, athletic build, and charismatic personality has always made him popular with the girls. But the only girl he was interested in, Leah, wouldn’t give him the time of day. His larger-than-life personality, his six-foot-four height, and the Kensington name have always commanded attention in the small town of Heritage but the expectations on him have also been high. And now that that his father is gone, he has a lot of responsibility on his shoulders. His uncle helped him bear the load the past few years but the more he settles back into Heritage, the more he can see that his uncle was often working against him. He may be heir to the Kensington fortune but can he convince the board that he has what it takes to run a multi-million dollar company?

Madison Westmore – Blond, curvy and beautiful, Madison was known for being “that girl” in town until the day she up and left. Now she is back, and she is different in so many ways. But past hurts and long-held insecurities feed her doubts that no one will believe—or care—that she has changed. No, her goal is to escape before anyone can find out. Too bad the new guy in town won’t stop asking questions.

Colby Marc – He’d been living the music dream until it crashed around his feet. Now he has to rebuilt his career and reputation but the media is making it harder than he imagined. Can hiding out in the small town of Heritage be what he needs to heal and move on? And can Madison help him on that journey?

The conjoined five – The name Madison came up with in high school to describe the close group of Leah, Caroline, Hannah, Janie, and Olivia. They have been close since middle school and now they are all finding their happily-ever-afters in the Restoring Heritage series.

Caroline (Williams) Quinn – Twin of Leah. She now lives an hour away on a ranch for struggling kids with her husband, former Army special forces, Grant Quinn.

Hannah (Thornton) Taylor – Mom of one, married to Luke and loves to fix other people’s problems. Like the fact she always thought Leah and Jon should have gotten together long ago. And now she is happy to encourage a second chance for them. After all, she got her second chance with her best friend Luke, her high school sweetheart gone wrong.

Janie (Matthews) Thornton – Married to Thomas. They run the diner and keep tabs on the town gossip because the diner is the gossip hotspot.

Olivia (Matthews) Williams – Married to the local pastor, Nate Williams, and full of fire herself. She is all about helping Leah and Nate’s friend Colby find love. 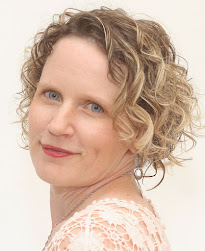 Tari Faris is the author of You Belong with Me and Until I Met You. A member of American Christian Fiction Writers and My Book Therapy, she is the projects manager for My Book Therapy, writes for learnhowtowriteanovel.com, and is a 2017 Genesis Award winner. She has an MDiv from Asbury Theological Seminary and lives in the Phoenix, Arizona, area with her husband and their three children. Although she lives in the Southwest now, she lived in a small town in Michigan for 25 years.
◆ WEBSITE ◆ FACEBOOK ◆ TWITTER ◆
◆ AMAZON ◆ GOODREADS ◆
◆ INSTAGRAM ◆ BOOKBUB ◆ 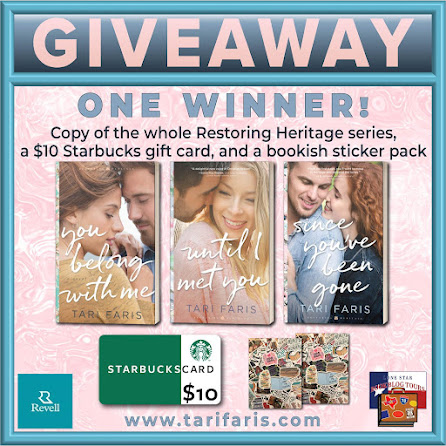 a Rafflecopter giveaway https://widget-prime.rafflecopter.com/launch.js
CLICK TO VISIT THE LONE STAR LITERARY LIFE TOUR PAGE
FOR DIRECT LINKS TO EACH POST ON THIS TOUR, UPDATED DAILY,
or visit the blogs directly: